Tapping a keg properly simply isn’t possible without using the right type of coupler. To become a tap-master, you should know about the six main keg couple types so you can handle different styles of beer like a pro. Here is a detailed look at all the main keg couplers and tips on how to use them with your draught beer setup.

Beer Keg Couplers and What Is the Difference Between Them?

Two common questions asked by those who are not familiar with  keg couplers are:

The first one is really easy to answer. Most couplers were independently designed by beer producers around the world before globalization and transnational corporations were started.

Problems started to come up when beer from, let’s say, Germany became easily available and commonly ordered in other parts of the world. Manufacturers wouldn’t compromise, so consumers had to work with multiple keg coupler types if they wanted to carry different styles or brands of beer.

What we have now are six different keg coupler types which cover pretty much every type of beer out there:

Before exploring the differences between these coupler types, here are a few things they have in common:

These keg coupling types are fairly similar in terms of how they work. The actual difference is in the way they are attached to the keg valve - more on that below.

Also known as the American Sankey coupler, the D-type keg coupler is the most common on this side of the world. Used by the majority of North American beers, including Molson, Corona, Coors, Budweiser, Miller, PBR, Yuengling, and so many more.

In addition to the standard variety, the keg coupler type D is also available in a low-profile (short handle) version to accommodate kegs in smaller, tight-space refrigeration systems. 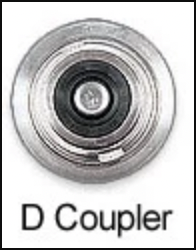 Alternatively known as the Irish or Guinness keg coupler type, the U-type keg coupler is mostly used for beers originating from Ireland, such as Guinness, Harp Lager, Smithwick's, and Magners Cider.

It’s not always easy to find a good U-type keg coupler for sale but we always have some in stock! 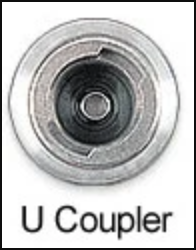 Known for its unusual triangle shape (see the picture below), the G-type keg coupler is most notably used by some British, Dutch, and even a few American breweries, including Anchor.

The legend says they decided to switch to an unusual European-style keg coupler G-type to help distinguish their kegs so they could be returned without confusion.

Other popular brands that use the G-type keg coupler include Boddington’s Pub Ale, Fuller’s, Grolsch, Sir Perry William’s, and Watney’s.

Often referred to as the European Sankey coupler, the S-type keg coupler is used for popular European brews like Amstel, Pilsner Urquell, Newcastle, and more. Alternative names for this type include:

The major difference between this European Sankey and American Sankey is in the probe. In American couplers, it’s short and broad while in the European ones it’s skinny and long.

If you try to hook up the S-type coupler to an American beer keg, you will most likely get a spray of beer in your face.

Reverse that (D-type coupler connected to a European Sankey keg) then the beer won’t pour at all. 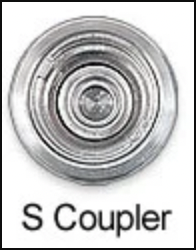 Used on almost all German beers and about half of the Belgian beers, the A-type keg coupler is commonly associated with brands like Ayinger, Bitburger Pilsner, De Dolle, Franziskaner, Hoegaarden, Krombacher, Löwenbräu, Paulaner, Warsteiner, and some others. 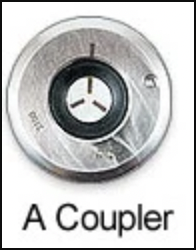 So, these were the five most common keg coupler types - D, U, G, S, and A. What about the sixth one? That’s right, there is also the M-type coupler, which is somewhat less common, but still worth a mention. M-type keg couplers are used on a few German beers like Schneider Weisse.

Unsure of which keg coupler type you need for your keg?

No problem. Below we have compiled a list of popular beers and which coupler type they belong to.

Although we try to keep this list as up-to-date as possible, the beer industry is constantly evolving. If the beer you're looking for is not listed, please  contact us and we will be able to look into it for you.