‘Cornelius keg ball lock vs. pin lock?’ has got to be one of the most frequently asked questions by both homebrewers and draft beer enthusiasts - and rightfully so.

There is indeed a big difference, and knowing it might help you choose the right  kegerator.

Here in this article, we’ll explain the difference between ball lock and pin lock kegs as well as share some keg choosing tips.

What’s the Use of Ball Lock & Pin Lock Kegs?

Both pin lock and ball lock kegs go all the way back to the second half of the 20th century when they were used by the two soda giants - Coca-Cola and Pepsi respectively - for storing and dispensing their beverages.

Someone whose name we’ll never know but always keep close to our hearts noticed that these  Cornelius kegs (Corny kegs) could also be used for beer dispensing - and that’s when it officially started.

Most homebrewers agreed that having a pin lock corny keg or a ball lock corny keg around was indeed quite handy, and started using them on a regular basis for their homebrewing, dispensing, and storing needs.

So, what is a ball lock keg and how do you use it? The term “ball lock” (or “pin lock” for that matter) refers to the way these locks are used to secure gas and liquid connections. You just put the ball lock on top of the gas/liquid post and push it down until it locks.

What’s the Difference Between Pin Lock and Ball Lock Kegs?

Now that we know what  Corny kegs are, let’s talk about the difference between pin lock and ball lock kegs. First of all, both serve the same purpose and deliver identical results so in reality there’s no such thing as ball lock vs. pin lock. 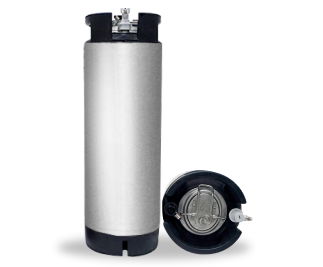 One might say that ball lock kegs are slightly more popular - simply because of the fact that Coca-Cola recycled/destroyed a big part of their kegs (that featured the pin lock connection) before they realized these kegs could be sold to homebrewers.

Another difference between the two is their size/dimensions:

Therefore, ball lock kegs are slightly taller and slimmer. The capacity, though, is the same - both types will hold 5 gallons each. 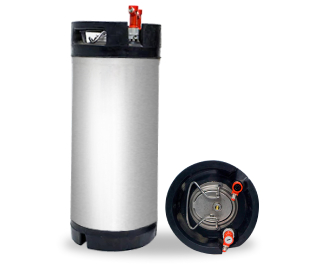 Another obvious difference is the type of lock: a pin lock fitting features little pins around it that are used to secure the connection while a ball lock features ball bearings that are slid on top of the gas/liquid post. 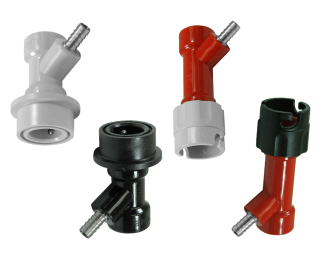 Can You Convert a Pin Lock Keg to a Ball Lock Keg?

Absolutely! To do this, you are going to need a Corny keg conversion kit, which usually consists of a gas fitting, liquid fitting, and a set of poppets + O-rings. You just unscrew the original fittings, replace the O-ring on the dip tubes, put the poppet inside a new fitting, and screw them on the respective post. Just make sure you don’t mix up the gas and the liquid fittings.

Can You Put Ball Lock Posts On a Pin Lock Keg?

Most likely, yes. To be 100% sure, you will need to make sure the posts have the right thread.

Which Type of Keg to Choose?

Since we know that there is no ‘corny keg ball lock vs pin lock’ rivalry, your choice ultimately boils down to the keg dimensions. For many kegerators, height is an issue so you’ll probably want to go with a shorter keg (that features a pin lock). If you are using a  keezer where it makes more sense to fill in as much horizontal space as possible, you might want to choose the slimmer, ball lock kegs. Other than that, the corny keg pin lock vs ball lock is not an issue at all.

Which Is Better: Pin Lock or Ball Lock Kegs?

One thing you may want to pay attention to though is the fact that ball lock kegs feature a pressure relief valve while pin lock kegs are depressurized by pushing down on the gas connection keg post.

Because of this, some homebrewers prefer a Corny keg ball vs. a pin lock but other than that, the two are completely identical in terms of what they do.