Although it’s not exactly beer, hard cider can be just as refreshing and tasty – especially if you know how to make hard apple cider. Here in this article, we give you a full set of recommendations on how to brew hard cider at home and make it really, really good.

You don’t have to be a pro brewer – all it takes is a Brooklyn Brew Shop cider making kit, some kitchenware, and a bit of magic. Let’s start step one, where we have to choose the right cider.

Even though we are going to be using a homebrewing kit (that typically contains ALL the required ingredients), there is one important ingredient we will have to go and pick by ourselves – this is the apple cider itself. This will form the basis for our hard cider.

The first question that you might have is what apple juice to use for hard cider. Of course, you don't have to have an orchard in your backyard – you can use any store-bought apple juice or even an apple cider, however, there are a couple of things that you want to be aware of.

What to Avoid in Apple Juice for Hard Cider

When picking the juice, look at the label to check if the juice is pasteurized or not. Most juice you get from the grocery store is going to be pasteurized. We recommend getting a pasteurized juice, because it ensures that there are no living organisms or wild yeast already present in the jug.

One other thing you want to make sure is that your cider or juice is not going to be stabilized. “Stabilized” is not a word that you'll see on the label, but what you might see is different chemicals used as stabilizers to prevent fermentation, such as sulfite, sorbate, or benzoate.

There’s nothing wrong with these chemicals if you’re planning to drink your juice as it is, without alcohol in it. But if you want to ferment these juices, you need to make sure that there's nothing in it that is going to inhibit the fermentation of the yeast you pitch into the fermenter.

Now that you’ve got the right apple juice for the hard cider (one gallon is enough), it’s time to open that Brooklyn Brew Shop hard cider making kit to see what kind of cider brewing equipment is inside: 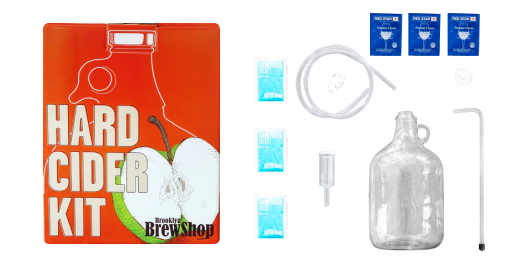 Although not a part of the standard hard cider equipment, 3 tablespoons of honey for bottling would also be nice.

Brewing hard cider with Brooklyn Brew Shop kits is as easy as can be – basically, all you need is this set of simple instructions on making hard cider and a bit of patience. There’s no particular hard cider recipe – you just brew your first batch, take notes, and then do it again. You learn as you go, experimenting along the way, with a trial and error system – that’s how to make apple cider from apple juice.

Sanitize Cleaning is a very important part of the process, because it helps to remove any organic soils from the surface of your fermenter. Sanitation is a key factor because it helps to kill any kind of living yeast or microorganisms that might end up affecting the flavor of our cider down the road. You should use the special sanitizer/cleaner that is included in the kit. Using dish soap for cleaning and sanitation is not recommended.

Take that one-gallon jug of preservative-free apple cider we mentioned earlier and pour it into the sanitized fermenter through a funnel.

Boiling apple juice for hard cider is required, if you are using homemade apple juice (which is obviously unpasteurized). After boiling, bring the juice to room temperature and then pour it in the fermenter.

How much sugar to add to apple juice for hard cider is completely up to you. Basically, the more sugar you add, the higher ABV you will get. 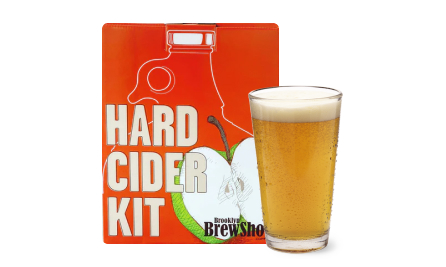 Once the juice is in, you need to pitch the yeast (basically, toss the whole packet in there). Shake it thoroughly and then attach the screw-top stopper to the fermenter.

Then, slide the rubber tubing no more than 1’’ into the stopper and place the other end in a small bowl filled with sanitizer. That’s how CO2 will escape from the fermented cider during the initial fermentation time (a couple of days, until the heavy bubbling subsides).

After that, clean/sanitize the tubing, reassemble the airlock, and get ready for cider secondary fermentation (takes two weeks). Again, how much sugar to add to cider for fermentation is completely up to your preferences (more sugar = higher ABV).

How to Sweeten Cider After Fermentation

If you’re not sure how much sugar to carbonate cider, you can use honey when bottling: pour a few tablespoons into a sanitized pot you will be siphoning your cider into. We talked about how to carbonate hard cider in the previous step.

How to Store Cider After Fermentation

All you have to do is wait patiently for 2 weeks while keeping the cider at a room temperature without moving it around (if the cider is still bubbling, leave it sitting until it stops – that’s when to bottle hard cider).

So, how to bottle hard cider? Well, first you have to siphon the cider into a sanitized pot with a few teaspoons of honey that we added earlier. Then, you siphon the cider from that pot into bottles (again, pre-sanitized), close them, and let them stay for another 2 weeks. After that, it’s ready to drink!

If you’re looking for more interesting homebrewing ideas, be sure to check this article of ours, where we talk about the best beer kits on the market.