When it comes to beer keg sizes, one might get a little bit overwhelmed since there are quite a few names and numbers to remember. However, once you get into them, keg sizes start to make perfect sense. Plus, you will hardly ever need them all at once, which makes keg sizes and types even easier to understand and remember. Follow Beverage Craft on a journey to find out everything about beer keg sizes in the US, Canada, and Europe. Let’s begin!

What Size Do Beer Kegs Come In?

Beer kegs come in quite a few standard keg sizes, mainly depending on how, where, and by whom they are going to be used. Naturally, if you’re in the market for a keg, knowing the difference between various keg sizes will certainly help you make the right choice and get the best keg for your draft beer dispensing system.

Even though now we have different size beer kegs, they all can be traced back down to a historical unit of measure for liquid volumes known as “barrel” in the US. This barrel was equal to 31 US gallons, and it’s from there that we got the half, quarter, and sixth of a barrel.

All of these keg sizes can be easily converted into litres, fluid ounces, or simply beer bottles/cans, for your convenience. There is another, non-standard size keg that you’ve probably heard about - the Cornelius keg (we’ll get into that in just a few seconds).

So, to answer the question “What size is a keg of beer?”, you first have to specify the type of the keg and only you can tell how much beer it fits. Now, let’s take a closer look at all the different keg sizes in more detail. 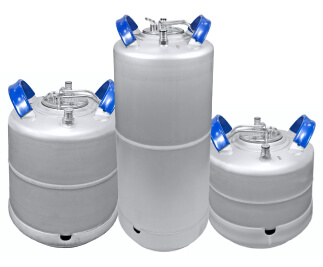 Also known as Corny kegs, these are commonly used (and prized!) by homebrewers - mainly, for their robust construction,  ease of cleaning, and a wide range of applications.

Originally, Cornelius kegs were intended to be used for dispensing soft drinks but later (through sheer luck we guess) they were discovered by homebrewers to be an ideal fit for storing and dispensing beer as well.

Typical Cornelius kegs are as follows:

What makes Corny kegs great is that they have a safety relief valve so you can get down inside and clean it by hand. Also, any Corny keg sizes are super-easy to take apart when you need to sanitize them. 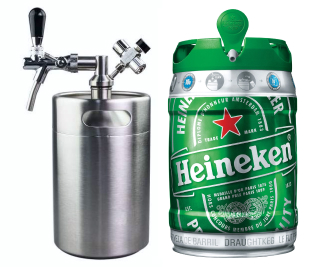 As you might have guessed from its name, the mini keg is one of the smallest beer vessels available on the market. The standard mini keg size is 5 litres (equal to roughly 169 ounces or 14 pints). That’s how many beers are in a mini keg.

Although mini kegs are a natural fit for mini kegerators, they can be compatible with larger kegerators as well.

Mini kegs are widely used in the retail beer trade. In fact, you might have seen one of these kegs in your local liquor store (especially if it’s Heineken).

This size keg is perfect for one-time use at home or at various outdoor events (tailgate parties or picnics). The downside of a mini keg is that it, as a rule, cannot be refilled and has to be recycled after every use.

The other difference between this keg and the Corny keg is the use of a traditional keg valve system (instead of a ball-lock or pin-lock connection). This means you’re going to need a keg coupler for proper dispensing.

Due to its compact size and shape, the sixth barrel keg is ideal for restaurants, bars, and homes with limited space. 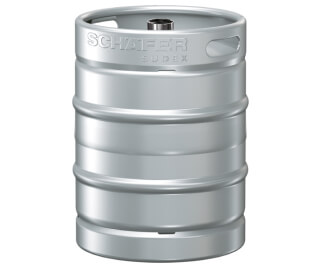 Half barrel kegs are probably the most common type of kegs out there. You might also know them as full-size kegs (which is slightly confusing). How many ounces are in a half-barrel keg? One thousand eighty-four, to be precise (roughly 124 pints).

As for the dimensions of a half barrel keg, it is usually slightly over 23 inches tall and about 16 inches in diameter, weighing roughly 160 pounds (when full).

One half-barrel keg in litres is 58.67 (holds about 15.5 gallons), which amounts to 165 twelve-ounce glasses of beer. If you’ve got a full-size kegerator, it should hold one standard half-barrel keg, which is rather convenient for restaurants and bars that frequently use this keg type. 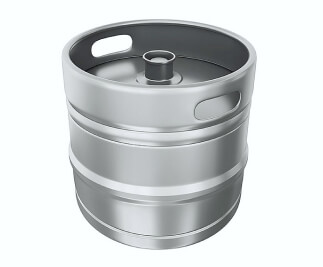 Unlike the full-size (half-barrel) keg, this keg type comes in two distinct variations: regular quarter and slim quarter. Both these types have the same capacity - the ¼ barrel keg size is 7.75 gal (29.3 litres). This amounts to roughly 62 pints of beer.

Being the shorter and stubbier of the two, the standard quarter barrel keg dimensions are 13⅞" by 16⅛". Its relatively small size should not be underestimated - this keg type is great for small parties and limited storage spaces since you can easily stack these kegs for storage in one kegerator or fridge. However, when stacked, only one keg can be tapped at a time. 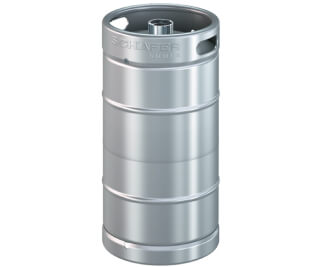 As we’ve mentioned before, this is the second variety of the quarter barrel keg. The difference is in the size and shape - unlike its stubby brother, the slim quarter keg is taller and skinnier (hence, its alternative name - the tall quarter).

You, as a customer, get to choose the variety that fits your kegerator better and, therefore, save up some space while getting the same amount of beer in the end. Slim quarter kegs are great for dual and triple kegerators (allowing you to serve multiple styles of beer from one kegerator).

As for the slim quarter keg dimensions, kegs of this type fit 7.75 gallons (992 ounces) of beer. This equals approximately 62 pints, which is a considerable amount.

If you haven’t gotten confused yet, you sure know your way around a beer keg. If you have though, this nice little keg sizes chart sums up all of the information we’ve given you so far. Here, you can easily compare different keg types and understand what size is a beer keg. 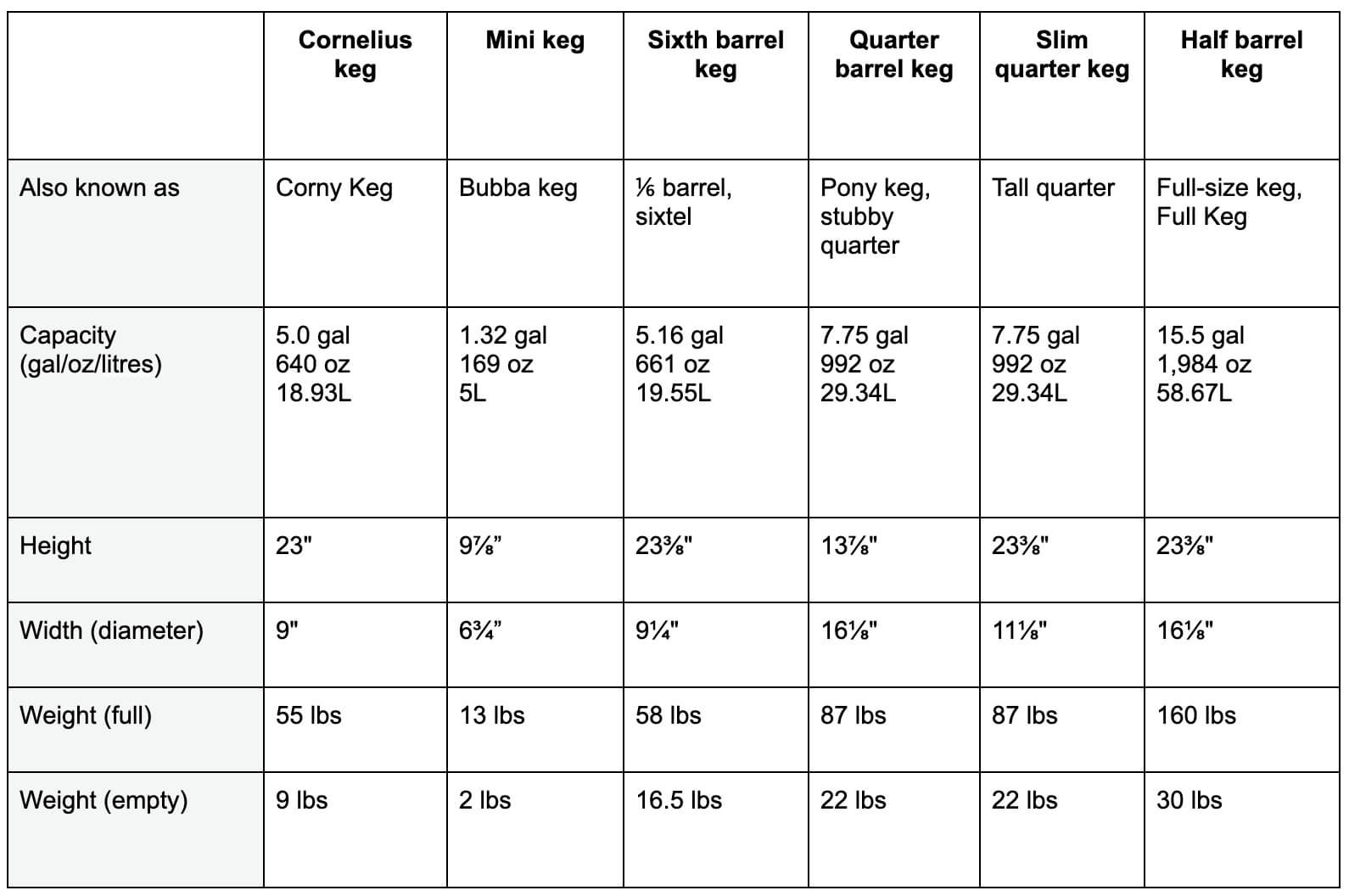 Beer Keg Sizes in the US

Beer keg sizes in the US have everything to do with the original unit of measurement that was known as the barrel and is believed to be equal to 36 gallons. With time, it slowly evolved into what we now know as a keg (15.5 gallons), which is also referred to as a half-barrel (go figure). From there on, barrel beer keg sizes get much more logical - you’ve got a half-barrel keg (15.5 gallons) followed by a quarter barrel keg (7.75 gallons) and a sixth barrel keg (5.16 gallons). Corny kegs are a thing of their own (remember, they came from the soft drink industry), which is why their standard size (5 gallons) has nothing to do with barrels.

The table below will give you an idea of the most common gallon keg sizes (including keg sizes 1/6).

Although Canada normally uses the metric system, that’s not always the case when it comes to beverages, especially beer. Because of the proximity to the US and often shared markets, it’s not uncommon for Canadian breweries, homebrewers, and bar owners to measure beer in gallons.

Switching between the metric and imperial system is usually not a problem since there are only a few key keg sizes in gallons to remember. The typical size of a keg of draft beer would probably be 5 litres since this is the standard capacity of the Corny keg that most homebrewers and draft beer enthusiasts like using.

The table below offers a quick comparison between imperial and metric units for the most popular types of beer kegs.

As for Europe, things are a bit different than in North America. Since most European beer equipment manufacturers and breweries conform to the standard of the metric system, it’s no surprise people will not understand gallons or fluid ounces (except for the UK, but more on that later).

So, what size are beer kegs in Europe? For example, in Germany, the standard keg sizes litres are 20, 30, and 50. Also, it’s not uncommon to measure beer in… beers! That is a standard beer bottle, which is equal to 0.5 litres (16.9 ounces). Therefore, you would have 10 beers in a Corny keg.

In the UK, they use a standard keg whose capacity is 11 imperial gallons, which just so happens to be almost 50 litres (50.007, to be precise).

If you are looking for  empty kegs for sale or simply want to find an affordable Corny keg, be sure to browse the Beverage Craft selection. We offer top-notch draft beer equipment and accessories at really affordable prices.